Dear people that sometimes fall on a webpage,

This is a long overdue online update of what happens offline, in this Munich Scene/Subculture(s) where all is known without the need of a WLAN connection.

Munich Again Thursdays is now a monthly Mittwoch in Import Export. I repeat. Munich Again is now every last Wednesday of the month in Import Export! For more informations about that, and for a long overdue wonderful overview of all the magic that happened weekly in Rote Sonne for 10 months : read under the cut B-)

The Munich Again Thursdays in Rote Sonne took place weekly (or so) from February 2017 to December 2017.  All in all, over 40 Facebook events created, showcasing 61 live bands, performances and even a theater piece, mostly from Munich, but also from Canada, India, Sweden, and from other galaxies. For those who like that kind of thing, here’s a selected piece that was written on the series by Curt Magazin.

From Noise to Indie Pop, from Krautrock to Techno, Munich Again Thursdays was a weekly rendez-vous for some (adventurous, and appreciative of the discount prices for regulars and artists), or a unique occasion to “finally see this band live” for others. Every month would see a new eclectic program, supported visually by a wonderful poster by Anna McCarthy.

Rote Sonne was a generous and open-minded host to this crazy series. However, a joint conclusion was reached : there were not enough resources available (time, money, people, ) to properly support such an ambitious weekly project in the long run.  But we had our fun. 🙂

It’s under a different identity that the “Munich Again Mittwoch – ***** Edition” is launched. Once a month. A clear sound direction. Concert timetables : Doors at 20:00 Uhr, Show at 20:30 Uhr. And we start on time. The motto goes as following :

Munich Again is a concert series showcasing local artists, musicians and performers and their colleagues abroad who gather together to make “music by music nerds, for music nerds”. A heterogeneous blend of sounds that aim to surprise, trigger and expand the mind. Because in the perfect world, Subkultur and Hochkultur go hand in hand, and maybe even have a thing together.

There you have it. February 28 will see the Drones Edition, March 28 the Ark Edition, and let’s see what comes next! See you in Import Export! 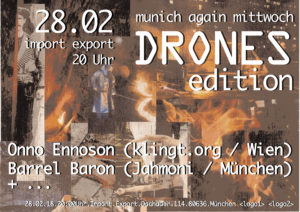